Skip to content
Hey! This site is reader-supported and we earn commissions if you purchase products from retailers after clicking on a link from our site.

Air oil separators and oil-water separators are vital components in compressed air systems to ensure that you have the highest air quality possible. During the compression process, outside contaminants such as water vapor and dust can easily mix in with the hot oil lubricating the system.

What Is an Oil-Water Separator?

Oil-water separators, sometimes referred to as condensate separators, are exactly as the name describes, they are a device used within oil-lubricated compressed air systems to separate oils and lubricants from liquid water.

Oil-water separators are designed to collect condensate from the air compressor, its tank, filters, and driers and remove the oil from the water prior to removing the substance down its drain. This eliminates the need to have the oily condensate hauled away. 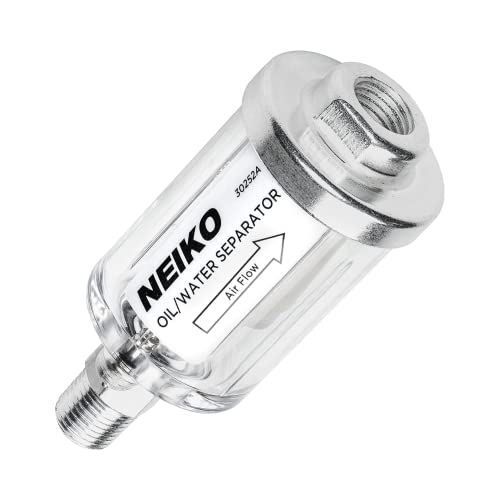 You will find an oil-water separator attached in-line between your air receiver tank or another component just listed and the tool attached at the end of the line. Most air tools require different pressures from one another. Depending on your system layout, and whether it might include multiple drops or not, regulators may be placed at each drop to reduce the pressure for your desired air tools.

Due to the pressure drop that occurs across a regulator, air can cool down and therefore moisture will increase, so it is necessary to implement a water separator after the regulator to remove the additional moisture in the air supply. It’s also vital that oil isn’t allowed to enter the regulator so that it is not damaged. Therefore, oil-water separators should be installed before the regulator.

Why Do I Need an Oil-Water Separator?

When you compress air, an inevitable by-product is condensation. This is because the now-pressurized air has become saturated in the compression stage. As you compress the air and decrease the volume, the molecules are forced to collide with each other, increasing their kinetic energy, and subsequently their pressure and temperature.

As the compressed air then cools in the system, the cooler air is unable to hold the moisture, and this begins to fall out of the air as condensate. While the air then passes through the compressor, the condensate released includes both liquid water from the moisture of the atmospheric air, and oil from the lubrication within the compressor.

The heat that is generated within the air compression stage causes a small amount of oil to vaporize each time that the compressor is used. This oil vapor then mixes with water vapor in the compression stage before falling out with the air along with the water condensate. Now, due to this contamination, the condensate from compressed air systems cannot just be dumped down a drain or into the environment, therefore, oil-water separators are needed and so important in compressed air systems!

How Does an Oil-Water Separator Work?

The oil-water separator is typically connected to a manifold installed to a condensate source such as the air receiver tank, aftercooler, air dryer, filters, and any other condensate traps within the compressed air system.

There are several methods to separate oil and water, each taking advantage of the varying chemical and physical properties that set oil and water apart. Five of the most common methods are:

Now, let’s look at each in more detail!

Adsorption works by holding oil to the surface. Oil is attracted to the surface of the adsorbent material electrostatically, and at the same time water is repelled, separating the two. Adsorbent materials may have multiple tiny pores in them which are there to maximize the available surfaces where oil can adsorb.

The chemical absorption method uses a chemical media that is able to attract and bind with oil at the same time as repelling water. Oils react chemically with the media in this method, which leads to them becoming trapped within the filter. This method is similar to the adsorption method, but instead of trapping the oil at the surface, it is trapped within the filter.

In non-chemical absorption, oil is pulled into and then held by the media without using a chemical bonding process. The material used must attract oil (oleophilic) and repel water (hydrophobic) to allow the water to pass through while oil is retained. A great example of a suitable material would be Polypropylene, which happens to be a water-repelling and oil-absorbent material.

The gravity separation method is the simplest of the four and simply involves letting the oil and water liquids separate naturally. Oils are lighter than water, therefore, they will naturally gravitate to the top of the column where they can be removed.

A drawback with this method is that it is not considered sufficient to meet some requirements for the disposal of compressed air condensate. Small amounts of the vaporized oil will become emulsified in the water during the compression stage and gravity alone will not separate it.

It may be, and this is very common, that the oil-water separator works using a combination of absorption and adsorption. These designs will have multiple stages of filtration, typically four as follows:

Condensate from drain valves enters a chamber for depressurization. This condensate is accompanied by a fraction of compressed air waste that is released when the drain valves open and close.

Air is then allowed to depressurize in the chamber and is vented back out to the atmosphere, so it doesn’t interfere in any way with the filtration process.

Activated carbon, or otherwise known as activated charcoal, is the only material that can reduce the oil contaminants down to federally mandated limits.

Lastly, the remaining water flows out of a drain at the bottom of the separator, and it can be discharged safely into a sanitary drain.

What Is an Air-Oil Separator?

They are strategically placed here so that the oil can be separated from the air and recycled back to the compression stage for lubrication. It may be impossible to remove all the oil, however, and so you will need to install additional filters down the line before the air reaches the pneumatic tool.

Why Do I Need an Air-Oil Separator?

Oil separators are needed to separate the oil from the air and keep it inside the compressor to lubricate the system further. The air, however, needs to head down the compressed air lines and reach the attached pneumatic tools. Oil or any other contaminants can cause damage to pneumatic tools, which is why it is so important to separate the oil from the air stream.

How Does an Air-Oil Separator Work?

In oil separators, most of the oil is separated from the air by centrifugal forces. The air-oil mixture enters the separator vessel at a specific angle so that the oil is pushed and dropped into an oil vessel. This removes most of the oil, but not all of it, as some oil exists in droplets or mist.

This oily compressed air is then forced to flow through the oil separator where its small droplets of oil get stuck. As more and more of the droplets get stuck, they begin to join and form larger droplets. When these droplets reach a certain size, they fall and then collect at the bottom of the oil separator filter. A scavenge line can then be used to suck up the oil at the bottom of the filter and remove it so that it can be recycled and sent back to the compression stage for lubrication

The higher the CFM of your air compressor, the greater the amount of condensate that will be created and require filtration. You will have no problems finding suitably sized oil separators for any size system, as they will range from 10 CFM all the way up to 1000 CFM systems.

When selecting the right size oil separator you must also be aware of the maximum oil absorption, condensate flow, and free air delivery will all vary depending on the environment.

These separator filters can generally hold more oil in colder environments while then being able to handle greater condensate flow rates in warmer environments. Depending on whether your filtration system operates in very warm or very cool environments, you may need to change the filters more frequently.

How does a compressor oil separator work?

Oil is separated from the air via centrifugal forces in oil separators. The air-oil mixture heads into the separator vessel at a certain angle so that the oil is naturally pushed and dropped into an oil vessel within the separator. This, therefore, removes most of the oil. However, some oil still exists in droplets or mist, and so, it is forced to flow through the separator and then these droplets get stuck, slowly beginning to form larger droplets that will eventually fall and collect at the bottom of the filter to be removed.

Yes, oil separators are very important to ensure that oil and other contaminants don’t reach your pneumatic tools, which could lead to damage to them. If oil is not removed from the air supply, it will move through the airlines and pick up additional contaminants like rust and debris and enter your attached pneumatic tool. This can not only damaging to your tool but also your project. The oil can also be recycled by a separator and sent down a scavenge line to be used in the compression stage as lubrication.

How do you separate oil from compressed air?

To separate oil from compressed air you will need an air-oil separator or water-oil separator. Typically you will need to strategically place the air-oil separator so that the oil can be separated from the air and recycled back to the compression stage for lubrication. On the other hand, you will find an oil-water separator attached in-line between your air receiver tank, filter, or drier and the end of line application, to separate the oil and moisture from each other.

What is an oil water separator for air compressor?

Oil-water separators, also known as condensate separators, are exactly as their name describes, they are a piece of equipment used within oil-lubricated compressed air systems to separate oils and lubricants from liquid water. Oil-water separators are designed to collect condensate from the air compressor, its tank, filters, and driers and remove the oil from the water prior to removing the substance down its drain. This eliminates the need to have the oily condensate hauled away.

If you have any questions about oil-water or air-oil separators, please leave a comment below, so then someone can help you!

Can I Use PEX For Compressed Air? Ultimate Guide To PEX Pipe

As an Amazon affiliate, we earn from qualifying purchases

Fix-My-Compressor.com is a participant in the Amazon Services LLC Associates Program, an affiliate advertising program designed to provide a means for sites to earn advertising fees by advertising and linking to Amazon.com. Amazon and the Amazon logo are trademarks of Amazon.com, Inc or its affiliates.