Skip to content
Hey! This site is reader-supported and we earn commissions if you purchase products from retailers after clicking on a link from our site.

Why does the unloader port on the compressor need a line to take it to the switch/shut-off? All it does is let a little relief out, why not just have it release at the check valve area. Why the need for the line going to switch box, it doesn’t operate anything.

All good questions. Let’s deal with why there is an unloader mechanism on an air compressor first.

For compressors running with 115/120 Volt electric motors a to drive the pump, they are typically plugged into, in North America at least, a standard wall socket. This socket is, in turn, wired to an electric panel in the house. 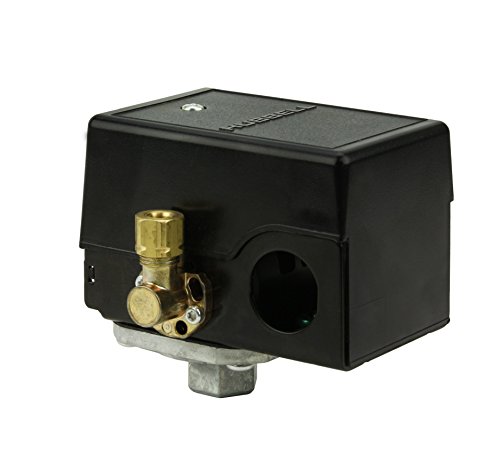 Who knows how many other devices are being powered by that same wire from the panel? All devices running at the same time from the same power line will reduce the flow of current to the downstream plugs. It is possible that the compressor is getting marginal power when it is starting.

An electric compressor motor requires an “inrush” current to get it going. The inrush current is borderline as to whether there is enough current available in a household plug to even start the compressor motor at all, even if there is nothing wrong with it.

Air trapped over the piston in a compressors

When a compressor stops, often there will be air trapped over the piston. This trapped air adds more load to the electric compressor motor when it is trying to start.

A 1.5 HP electric motor when new, and not under load, needs around 10 amps to run. Starting that electric compressor motor taxes the power supply. When that 1.5 HP motor pulls inrush current to start, the demand grows substantially. So much so that the same motor, when under increased load from air trapped over the piston, may draw enough amperage to exceed the supply in household current.

Yes, the start capacitor is there to boost the current on start up. If the load exceeds even that additional capability, then the motor will not start.

Many small air compressors have a pressure switch with an unloader valve as shown in the photo we added above. That unloader valve is connected to an air line that allows air to flow from over the compressor piston to that valve.

When the air compressor starts to fill the tank with air again, the pressure switch trips to allow flow of power to the motor, and the movement of the pressure switch adjusts the lever, and shuts the air flow from over the piston, so the air generated will go into the the tank.

It is the opening and closing of the unloader valve that is the reason for the line from the pump head over to the unloader valve. Otherwise, air would bleed out all of the time, and less air or none would go into the tank.

As an Amazon affiliate, we earn from qualifying purchases

Fix-My-Compressor.com is a participant in the Amazon Services LLC Associates Program, an affiliate advertising program designed to provide a means for sites to earn advertising fees by advertising and linking to Amazon.com. Amazon and the Amazon logo are trademarks of Amazon.com, Inc or its affiliates.